A Police Officer In Your Rearview Mirror

Your client is driving along late one night on a deserted highway in Virginia. He is not speeding or swerving. He isn’t driving on the shoulder of the road or into opposing lanes of traffic. He is obeying traffic signals. He has a valid inspection sticker and there is nothing wrong with his car. 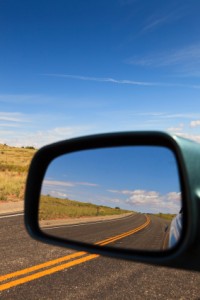 While he tells you he did not feel intoxicated at the time, he admits to having had a few drinks earlier in the evening before climbing into his car. Depending on the timeframe and speed with which he consumed these drinks, the amount and type of food he has in his stomach, his size and weight, and a number of other factors, these drinks could have put your hypothetical client over the legal limit of 0.08.

When your client is less than a half a mile from home, he looks into his rearview mirror and notices that a police cruiser has pulled in behind him. He doesn’t know what drew the officer’s attention to him but the officer is now clearly tracking his movements.  Most of us are familiar with this phenomenon – that unsettling sight of a police cruiser in the rearview mirror.  Is he trying to get past us?  Is he pulling us over?  We become momentarily distracted.

This is what happens to your client.  According to the police report, his car swerves two times over the center lane divider.  The car then straddles the divider for two or three seconds.  Depending on the jurisdiction, this could be sufficient grounds for the police officer to make a traffic stop.

A traffic stop is a seizure for Fourth Amendment purposes.  This means that the officer needs to have reasonable suspicion or probable cause to pull someone over.  Otherwise, any evidence collected after the stop can be “suppressed” (that is, precluded from being introduced at trial) as the “tainted fruit” of an illegal stop.  In each case, the court needs to balance the needs of effective law enforcement with the constitutional rights of people traveling on public roads.

There are some great cases in Pennsylvania – beloved by all criminal defense attorneys – that hold that such momentary weaving would not provide the officer with sufficient grounds to make the traffic stop.  But your client is not in Pennsylvania; he is in Virginia.  And, with some of the most severe laws in the nation pertaining to driving while intoxicated, Virginia is one of the worst places to be pulled over under suspicion of drinking-and-driving.

The most frequently cited case that deals with this type of situation – at least as far as you can tell – is Commonwealth v. Neal, 498 S.E. 2d 422 (1998) which prosecutors would argue would apply to the fact scenario in this hypothetical. Most judges would seem to agree. Even the Virginia Lawyers Practice Handbook, which is targeted at criminal defense lawyers, has this to say about the case:  “When an officer stated that he observed the defendant’s car weaving five to ten times in a period of 25 seconds over a distance of approximately half a mile, he asserted an articulable fact that gave rise to a reasonable suspicion of illegal activity that was a permissible basis for stopping the car.”

Arguably, there were other facts in the Neal case that should have contributed to the court’s finding of reasonable suspicion.  For example, the suspect was also speeding.  The officer was responding to a radio call about a reckless driver when he first encountered the suspect.  Moreover, the extent of the weaving in Neal was much more extensive than in the hypothetical example above:  the suspect swerved to the center of the highway and then back again and then weaved inside its lane between five and ten times, touching the right side of the lane each time.

You can thus argue that the facts of your client’s case are more analogous to Commonwealth v. Webb, 56 Va. Cir. 419 (2001), in which the court failed to find that reasonable suspicion supported the stop.  In that case, an experienced police officer observed the suspect’s car touching but not crossing the middle lane of a divided highway and then touching or running along, but again not crossing, the outside lane marker.  The vehicle then drifted back to the left such that the left wheels again touched the middle lane divider.

But good luck with that.  Next time you look in your rear view mirror and find a police officer on your tail, don’t forget that you are in Virginia.

← Albert Haynesworth Charged With Assault
No You Can’t →

3 Comments on “A Police Officer In Your Rearview Mirror”