On the Washington Redskins and Donovan McNabb’s Benching 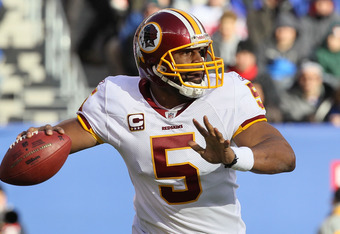 I have always been a big fan of Donovan McNabb.  I watched him lead the Eagles for six years when we lived in Philadelphia, and I was present at the game in 2002 when he threw three touchdown passes AFTER he broke his leg.  That, I thought, was toughness.  Hearing that story, how could anyone question how much money pro football players earn?

I thought McNabb handled the Ricky Williams, Terrell Owens and Rush Limbaugh controversies in Philadelphia with class.  My sons were happy when the Redskins traded for him this past summer.  It was as though we were able to bring with us a part of the city my boys missed so much upon moving back to D.C.  And I thought McNabb brought some well-needed maturity and leadership to the Redskins locker room.

If I had my doubts, it was only because of what I know about Eagles Coach Andy Reid.  It was Reid who drafted McNabb out of Syracuse, angering many Eagles fans who had their eyes on Ricky Williams, and it was Reid who worked directly with McNabb for 11 years.  That the Eagles were willing to trade McNabb to a division rival should have been a good indication to the Redskins just how Reid assessed McNabb’s continued ability to play this game.

A Yahoo sports writer has accused Redskins coach Mike Shanahan of using Albert Haynesworth and now McNabb as scapegoats for the Redskins’ failures this season.  This is the same sports writer who accused Shanahan of engaging in a battle of egos with his players.  I disagree.  When things aren’t working, you need to reevaluate.  When things aren’t working, you need to make some changes.

Mike Shanahan knew when he made the decision to bench McNabb that he would be creating a large controversy.   McNabb has said he has felt more welcome, more comfortable, in this city than he ever felt in Philadelphia, despite his 11 seasons there.  And the city has embraced McNabb in return. It speaks well of Shanahan that he was willing to do what he thought needed to be done, public fallout be damned.