On Sympathetic Clients and Our People In Uniform 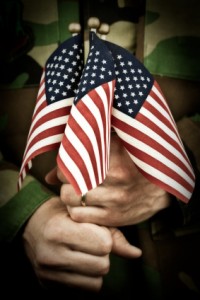 Your client is charged with two misdemeanor firearm charges – possession of an unregistered firearm and possession of unregistered ammunition – and when you read the police report, you are surprised he isn’t facing more serious felony charges. According to the report, the police responded to a 9-1-1 call about an intruder in a home. When they arrived at your client’s house, he confronted them with an AK-47, pointing the assault weapon at one of them.

In other words, you are not sure why he is not also facing assault on a police officer with a deadly weapon.

Then you meet the client. Arriving at your office in Georgetown, he is a strikingly fragile-looking, 20-year-old white man with acne still on his face.  He is also walking with a cane. He was six and a half months into his first tour in Afghanistan when he was shot through the leg during a fire fight, the bullet severing the bone and crippling him. He is now in treatment at Walter Reed hospital – physical therapy for the wounded leg, which is now a couple of inches shorter than the other one, and psychiatric counseling for a serious case of post-traumatic stress disorder.  The night terrors that plague him every night are what caused his run-in with the police.

When you reach the prosecutor, there is none of that “let me check my file and get right back to you” thing.  The prosecutor knows your client’s name and situation immediately. We don’t want to screw this guy, the prosecutor says. We just to make sure he is in treatment.

So you email over copies of his medical records, along with information on his bronze star and other combat awards. You also bring hardcopies with you to court on the morning of the next listing. It’s a different prosecutor this time but he too knows your client’s name immediately.  He also confirms the terms of the agreement:  the client will plead guilty to one misdemeanor charge.  He will be put on 9 months of supervised probation, with the requirement that he continue psychiatric treatment through Walter Reed. Assuming your client completes the terms of the probation successfully, he will be able to get the conviction expunged from his record under D.C.’s Youth Rehabilitation Act.

Your client’s case is called, and you and your client approach the bar of the court. The judge is a kindly man who takes 15 minutes every morning to explain to people in the gallery exactly what will happen that day. While you have heard the same spiel again and again and occasionally find yourself looking at your watch, you know exactly why he does it. He is taking advantage of this teaching moment for the good of the community. He is engendering respect for our legal system.

As soon as the judge sees your client with his camouflage fatigues and cane, he calls you and the prosecutor to the bench for a private conference. What’s going on here, he wants to know.

Later, after accepting the plea, the judge turns to the gallery. The young man in front of me, he says, has served his country admirably. We all owe him a tremendous debt of gratitude. The judge then reduces the agreed upon sentence from nine months to six months.

The judge has already “stepped back” (i.e., taken into custody) three people that morning. While a sentence of six months’ probation is entirely reasonable for a first-time misdemeanor offender such as your client, the judge knows that he could be accused of preferential treatment.

You don’t hear anything from the gallery when the judge announces the sentence, but your client’s platoon sergeant tells you later that there was in fact some grumbling afterward.  The sergeant laughs.  “We’re not all that popular in some quarters,” he says.

You yourself don’t detect any signs of hostility. Another defense lawyer comes up to shake your client’s hand as you and the client leave the courtroom.  People stand aside respectfully in the hallway and hold every door for you as you go outside. Once on the street, the two of you are approached on the street by a man. You are thinking the man is going to ask for money. Which he does. But he also wants to shake your client’s hand and to thank him.

You are not able to pick and choose your clients as a public defender. While a private attorney does have this luxury, you still end up with people who may seem pretty unsavory to a judge or a jury. And that’s why you appreciate our people in uniform:  in addition to the personal gratitude you may feel towards them for their service, it makes your job so much easier. It is the same gratitude you feel toward a client who remembers to show up to court in a suit and tie.

Long after the attention and gratitude have passed, this young man will still be left to deal with the challenges of his physical impairment. But for the moment, his uniform and his disability have helped to cut him a small break:  a reduced sentence on a possibly reduced charge. Speaking on behalf of all of us, the judge who never misses a teaching moment knew enough to thank him. For that too you are grateful. There is something to be said for every small favor.

4 Comments on “On Sympathetic Clients and Our People In Uniform”