My mother-in-law is one tough cookie.  I have been watching Washington Redskin football games with her for almost 25 years now, and I know that players who get on her bad side tend to stay there.  They also don’t last very long as Redskins. 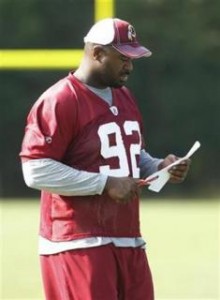 Albert Haynesworth has been one of those players.

With almost $41 million of Haynesworth’s $100 million contract guaranteed, a Washington Post sports writer estimates that Haynesworth has been paid half a million dollars for every tackle he has made.  He is probably averaging twice that amount for every time he has complained, missed practice or otherwise served as a disruptive influence on the team.

The Eagles learned the hard way during Terrell Owens’ second season in Philadelphia how one egotistical superstar in the locker room can ruin the prospects of any team, no matter how promising those prospects may be and no matter how talented the prima donna.  The Redskins don’t seem to ever learn the same lesson, no matter how many “teaching moments” they have been afforded over the last 20 years.

Last April Haynesworth complained that he couldn’t see himself playing in the 3-4 defense being instituted by new coach Mike Shanahan.  While that didn’t stop him from cashing the $21 million check from Redskins owner Dan Snyder, it did stop him from reporting to training camp like everyone else.

Haynesworth has been virtually daring the Redskins to suspend him ever since.  Now, with the Redskins’ season pretty much over, Shanahan picked a perfect time to send an unmistakable message to every present and future Redskin player:  Stop whining.  Just get out on the field and play.

Jason Cole of Yahoo Sports criticizes Shanahan for engaging in a battle of egos with his players.   Shanahan, he says, “has spent the past 10 years of his career trying to prove to people how great he is by trying to control everything and everyone.”

That sounds pretty good to me.

Joe Gibbs was a kind and religious man but he ruled the Redskins during the 1980s with an iron fist.  Marty Schottenheimer tried to reinstitute some of that discipline during his very short tenure with the team during the 1990s but he was soon out on his ear, presumably because he challenged Snyder’s control over the team.  We can only hope that Shanahan’s decision today to suspend Haynesworth is a sign of things to come and that it reflects a long overdue recognition by Snyder that he needs to leave the football to the people who know football.

Cole pokes fun at the Redskin fans who see Haynesworth as “some overpaid, underperforming louse” and who will be applauding his suspension.  Once again, Cole has it absolutely right.  Somewhere just outside the beltway, I can hear my mother-in-law cheering. She herself couldn’t have come up with a better way to describe him. And, believe me, she has come up with some doozies.

← On British Accents and Trial Strategies
On Networking, Referrals, and Friendships →