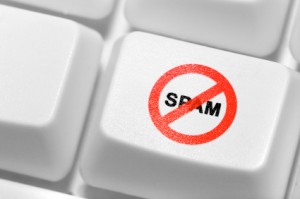 Sometimes spammers use a compliment to get you to approve their comment:  “Terrific work!” someone tried to post on my site yesterday.  “This is the type of information that should be shared around the web.  Shame on the search engines for not positioning this post higher!”  Oh, so true!

Sometimes they try to correct you:  “Please note that the link is no longer active.  Urgent repair is necessary.”

Usually the spam consists of nothing more than a long jumble of words and website addresses.

And then there is the spam you occasionally get from other bloggers.

Now don’t get me wrong:  I like to get comments from other bloggers.  If a blogger posts something in response to something I have written and also gets a little Google juice by linking the comment back to the blogger’s own site, hey, that’s fine with me.  Thanks for visiting.

What is more questionable is when a blogger actually hires someone else – probably someone in India or the Philippines – to go around posting comments on other people’s sites.

For example, back when I was brand new to this blogging thing, I received a comment linking back to the website of a very successful criminal defense attorney here in town.  My first reaction upon seeing the site was to be flattered.  Goodness.  This guy actually visited my site?

Then I looked at the comment again. I had posted about a lawyer in Texas who put up on billboards to advertise his divorce practice.  This was the comment I received in response:

Through your billboards, they can be able to know the product you are advertising with them.  You can also try to search for place with high traffic areas and you can decide to put up your billboard along the way so that during traffic hours they can have the chance to glance at it.

I had to read the comment a third time to try to figure out what the guy was saying.  You mean, put the billboards where people can see them?  This is when it finally dawned on me that the lawyer had not written the comment himself.

Many months later, I was sitting in court next to this lawyer while we both waited for our cases to be called, and we struck up a conversation.  After some pleasantries, I related the incident I just described above.  I asked him if he didn’t mind having these people going around making these stupid comments on other people’s sites and then connecting back to his.

The lawyer laughed and told me that, although he employs a lot of people, there is not a single thing that goes up on his website that he has not personally approved.  But on the other stuff, he said, well, sometimes you just need to turn a blind eye.   He pays the money, the search engine optimization (SEO) people do their thing, and everyone comes out happy, right?

To me, the lawyer’s comment raises a number of different issues.  First of all, he raises an ethical issue. The commentors don’t actually use the name of the lawyer whose website they link back to so there is no misrepresentation involved.  By using the link, they simply suggest some type of association.  And, while generally foolish, the comments themselves are innocuous.  They don’t misinform or mislead anyone.  In fact, as with the examples above, they really don’t say anything at all. At the same time, as Eric Turkewitz put it so well when coining the phrase “outsourcing marketing = outsourcing ethics,” a lawyer runs the risk of committing ethical violations every time he allows hired people do his bidding without supervision.

The second issue raised by the lawyer’s approach is the question of his professional reputation.  Engaging in this type of practice will not endear the lawyer to his colleagues on the Internet.  The lawyer was in fact called out a couple of months ago by a prominent blogger for his practice of hiring people to write entries for one of his 6 blogs at $20 a pop. The hiring of ghostbloggers would make him suspect in many quarters, and for good reason. Other people would be annoyed by the spam posted by the legions of people he funds.  And it is doubtful anyone ever reads any of the blogs he maintains with each blog entry beginning with “experienced D.C. criminal defense attorney.”

This lawyer already has an excellent reputation within the D.C. criminal defense bar. He is known as someone who knows his way around the law and the courtroom and who gets good results for his clients, and it is unlikely that his poor on-line reputation will have any impact on this local reputation, at least in the short term.

The fact is, beyond a simple and static website, very few criminal defense lawyers in this city have much of an on-line presence. Few lawyers spend much time surfing the blogosphere to check out the on-line reputations of their colleagues, and I can’t imagine that many potential clients go beyond page one on Google. As a result, if you asked this lawyer about his on-line reputation, I am guessing that, if he thought about it at all, he would tell you he doesn’t care. He would also probably tell you he himself doesn’t think much of the lawyer who seems to spend most of his day on the Internet. The Internet for the D.C. lawyer is a marketing tool, not a way of life.

This is not to say you shouldn’t care about your on-line reputation. Who knows how many people lose out on jobs because of something stupid they have done on the Internet. The problem is only going to get worse.  And I certainly care about my reputation. But the reason I care has far more to do with social reasons – I enjoy the sense of community I get through participating in the blawgosphere – than anything related to marketing.

As for the hiring of people to spam other people’s blogs, this is not something I will be doing any time soon.  Even apart from the ethical issues, I wouldn’t want my name or firm to be associated with this type of practice no matter how lucrative it may (or may not) be.  I probably couldn’t afford it even if I wanted to. Finally and most importantly, I don’t need anyone else’s help in posting inane comments on other people’s sites.  I have plenty of stupid things to say on my own.

← “Law and Baseball” Extends Lead Into Week 3
“There were days like this, that passed without an image” →