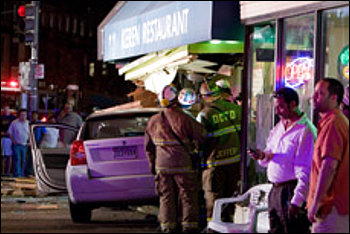 The woman who ran into two pedestrians before her car crashed into an Adams Morgan restaurant last night has, according to the Washington Post, been charged with aggravated assault as well as driving under the influence. Both pedestrians hit by the car are still hospitalized, one in serious condition and the other in critical condition.

While one might normally think of aggravated assault as an intentional act to seriously injure another person, the D.C. statute includes the causing of serious bodily injury to another person “[u]nder circumstances manifesting extreme indifference to human life.”  The government is obviously prepared to argue that 23-year-old Chamica Adams exhibited such extreme indifference when she got behind the wheel of the car while intoxicated.

← What A Prosecutor Says Versus What A Defense Lawyer Hears
Memories of 9/11: “He Kept The Meter Running The Whole Time” →