Yahoo ran the draft last night for the Criminal Law Blog Fantasy Football League.  Participants can see the results on the site.  Probable Cause used the number one draft pick to select Chris Johnson.  Austin Criminal Defense took Adrian Peterson with the second pick, and Gamso – For the Defense used the third pick to select Maurice Jones-Drew. 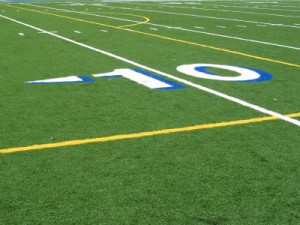 Chandler Criminal Defense drew the short straw and selected last at number 18.  This wasn’t too bad, considering he used this pick to select QB Drew Brees of the New Orleans Saints.  Selecting last in the first round also gave Chandler Criminal Defense the first pick in the second round.  In other words, he had two picks in a row.  He used his second pick to select WR Larry Fitzgerald of the Arizona Cardinals. Brees and Fitzgerald were both number one at their respective positions in last year’s draft.

I am committed to making this fun and easy for everyone, so please feel free to email or call me with any questions.  I have already received a few questions.  For those of you who are new to this, here are a few things that might be helpful to know.

How did the draft work?

While some leagues use a live draft in which participants sit around in person or on the computers to make their selections, I thought that might be too ambitious for this very busy group of lawyers.  So, like most leagues, we used an autodraft.  This means that everyone selected desired draft orders upon signing up the team.  Yahoo then ran the draft based on these orders.  In other words, Yahoo looked for the top unclaimed player on your list to select your pick during each round.

Participants were randomly assigned a draft order.  The list reversed during each round so that the player who selected last in one round selected first in the next, the players who selected third to last in the first round had the third pick in the second round, and so on.

Those of you who did not change your team’s draft rankings were assigned a default order by Yahoo.  Based on my experience, unless you know more than the combined wisdom of the thousands of other people who have participated in this league or unless there is a player that you just have to have, it is usually not a good idea to tinker too much with the default order.  My niece used the default ranking to win a family league last year. I tell you, there is nothing humbling than to be beaten by a team named “Pink Prancing Ponies.”

How do I manage my team?

There are 15 players on each team.  Your starting line-up – the only players who will count toward your score each week – consists of a quarterback, three wide receivers, two running backs, a tight end, a team defense, and then a swing spot that can be used for either a wide receiver or running back.  You want to make sure that the players who will earn the most points – measured in terms of yards rushing, receptions, TDs, etc – are in your starting line-up each week.  You also want to make sure that you substitute for any starting players who might be injured that week or, later in the season, whose team might have a bye week.  During the season, you should also monitor the waiver wire for players who might have been released by another team or look for unclaimed players who might be performing better than expected.

What do I need to do between now and the start of the season?

There is not a lot to do between now and the beginning of the season.  There may be some trade proposals.  You might check to see if there are any unclaimed players you might want to pick up.  And don’t be afraid to post some “smack” talk to intimidate the other participants. We have chosen a very serious profession. I’m glad people are willing to having a little fun.

← Justice, Injustice, and the Perspective of a Loving Spouse
The Blood/Breath Partition Ratio in a DWI Case →