Unauthorized Use of a Vehicle in D.C.: Man Masquerades as Metro Bus Driver 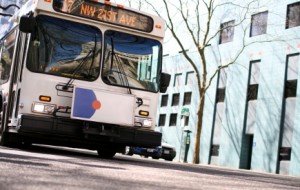 According to the Washington Post, a 19-year-old man wearing a Metro bus driver’s uniform walked into the Bladensburg bus garage, got into a bus, and drove away. But instead of making off with the bus, the man drove the correct B2 route, picking up passengers along the way. It wasn’t until he crashed the bus four miles into the route and fled that anyone was alerted to the fact that he may not have been legitimate.

The man, who told investigators he was simply fascinated with buses, has been charged with unauthorized use of a vehicle and fleeing the scene of an accident.

Motor vehicle is defined as any automobile, self-propelled mobile home, motorcycle, truck, truck trailor, or bus.  Unauthorized use of a motor vehicle is a felony offense punishable by a maximum fine of $1,000 and up to five years of imprisonment.