Lessons from the Gilbert Arenas Cover-Up 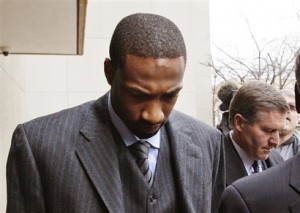 “Ur new story.  U were n the training rm when u got out there were 3 guns on ur chair with a note.  That said pick one.  Send to javaris ill take the Blame. He didn’t have a gun he didn’t do anything.  Ill come up with the story.  But that all he needs to say.”

This is the text message Washington Wizards basketball player Gilbert Arenas sent to another teammate on December 22, 2009.  This was a day after Arenas was involved in the locker room incident with fellow Wizard Javaris Crittendon that led to gun charges for both players.

The lesson?  Think of Richard Nixon and Watergate. Cover up efforts can often lead to more trouble than the original offense.  They can lead to additional criminal charges, such as obstruction of justice.  They can come in at trial as an acknowledgement of guilt on the original charges, thereby making life more difficult for your lawyer.  And, as Gilbert Arenas is finding out, they can complicate things for you during sentencing.

← DWI/DUI: What NHTSA Does Not Tell Us About the Horizontal Gaze Nystagmus (HGN) Test
On Mirriam Seddiq and the “Not Guilty No Way” Blog →