On Ghostblogging, West Berlin, and the Internet 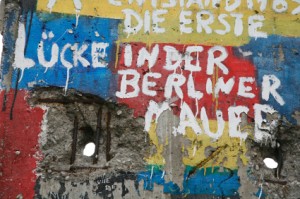 As a college student in the 1970s, I visited East Berlin with some friends.  One night, after returning back into West Berlin through Checkpoint Charlie, we were at a pizza parlor when we witnessed a fist-fight outside a nightclub next door.  I had never seen anything like that before, and was shocked by the brutality of the fight.  I kept wondering when the police would arrive but they never did.  Instead, the two guys eventually tired of the fight and, dusting themselves off and checking their wounds, each went his own way.  Sitting there in disbelief, it occurred to me that, through this still divided city, I had just witnessed the very difference between East and West during the Cold War era.

East Berlin was completely devoid of any life.  With the shell of buildings on every block still bombed out over thirty years after the Second World War, there were few cars, no food in the grocery stores, no newspapers on the street, no books in the bookstore.  I don’t think I saw a single child playing on the street while I was there.  But there was a police officer on every corner.

West Berlin, by contrast, was alive and thriving with neon lights and the pulse of traffic on its streets. But, with the prostitutes on every corner and fist-fights outside night clubs, it was also decadent; living proof of what human beings will do if left to their own devices.

There has been another dust-up on one of Mark Bennett’s blogs, Social Media Tyro, that reminded me of that night in West Berlin.  Specifically, in an entry entitled “Rent-a-Brain with GhostBloggers,” Bennett complained about lawyers who hire professionals to write their legal blogs for them:

“When a client hires a lawyer, more than the results or the face or the résumé, he’s paying for the lawyer’s knowledge, intellect and heart—attributes that good writing reveals and ghostwriting falsifies. Hiring a ghostwriter to write your blog (like some of the people here using a ghostwriter “to enhance their credibility”) is no more ethical than subscribing to TheWholeGhostPackage.com.” 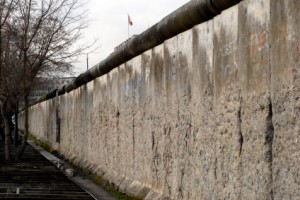 One of the ghostwriters wrote to Bennett asking him to delete the link to the lawyer testimonials of the service, fearing the link would embarrass the lawyers who have chosen to use the ghostwriting service.  The writer apparently did not take time to find out anything about Bennett.  Bennett not only refused, but he posted the letter as well, along with his response:

“It is crucial that those with ultimate legal and ethical responsibility for online marketing (the lawyers) realize that they have some skin in the game. Some lawyers feeling that it is okay to have a “front man” causes many of the problems with unethical online marketing: they trust a non-lawyer to do it for them, and wind up paying for spam, splogging, or ghostblogging. I suspect that when lawyers realize that they might be called to public account for the things they delegate to others (Outsourcing Marketing = Outsourcing Ethics), they give a lot more thought to their marketing choices.”

As I have mentioned before, I am a loyal reader of Bennett’s blogs, but I don’t agree with him on this one, or with Scott Greenfield who joined the fray with his own post.  Greenfield suggests that, as a newcomer to the blawgosphere, I may be naïve.  Writes he, in response to my comment on his site:

“People like Bennett, [Brian] Tannebaum and I were here before the marketers tried to turn this place into just another marketing scam.  You’re new.  You haven’t watch the onslaught of scams that have worked their way through the blawgosphere over the past few years,  They taint us all.  We are accused by people we don’t know of being a part of the deception, the manipulation of the public, who attribute motives to our blawging based upon what the shills scream, that this is all done to lie to potential clients and suck the last dime out of their pocket.”

Maybe so.  And, yes, I am a newcomer.  But I am against this type of public humiliation, or “cyberbullying” as someone has termed it.  I also do not agree with Bennett and Greenfield that using a ghostwriter is necessarily dishonest or unethical.  For one thing, I think they underestimate the sophistication of most people using the Internet.  Most people visiting a lawyer’s website will be able to distinguish between the canned language of a hired writer and the distinctive voice of a lawyer, such as Bennett or Greenfield, writing for himself.

People say that, after years of writing for President Kennedy, Ted Sorensen sounded more like Kennedy than the President himself.  Ted Sorensen wrote in his autobiography that even he can no longer remember which of the famous lines were penned by him and which of them were written by Kennedy.  If Sorensen doesn’t care, why should we?  The words are still Kennedy’s words.  It was he who adopted them.  It was he who uttered them.  And it was he who was ultimately responsible for them. 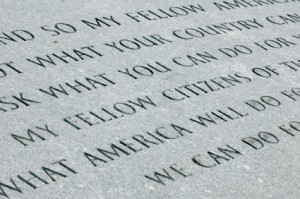 But, obviously, there is more going on here than just ghost-blogging.  As Greenfield says, it is also about the Internet.  It is about the growing recognition within the legal community of the growing importance of the Internet with respect to marketing.  It’s about the influx of new blogging lawyers such as myself who are clogging up cyberspace.

Elsewhere on his website, in a section called “About Lawyer Websites,” Greenfield writes that it has been painful for him to “scan the internet and see websites of attorneys claiming to be the best in their field when no one has ever heard of them”:  “Apparently, these attorneys put their resources into paying search engines so that their websites pop up first rather than into representing their clients or perfecting their skills as an attorney.  This is a sad commentary on the legal profession.”

Again, maybe so.  I have complained myself about the endless spam comments I receive on this blog and the endless phone calls from hucksters trying to sign me up for a search engine optimization program.

At the same time, I think this trend is inevitable.  Policing the blawgosphere and calling out specific lawyers on what are still debatable ethical issues seems to me, as I wrote on Greenfield’s site, paternalistic and futile.  As I witnessed in West Berlin, people are going to do what they are going to do.  And I’m not so sure that is always a bad thing.

← Philadelphia: Where the One-Eyed Man is King
Effective Assistance of Counsel and David Feige →

8 Comments on “On Ghostblogging, West Berlin, and the Internet”