A Conflict of Interest for D.C. Superior Court Judges

Yesterday’s testimony of D.C. Superior Court Magistrate Judge Janet Albert as a witness in a criminal case against her former girlfriend raises challenges for everyone involved.  A number of D.C. judges, including Lynn Leibovitz, refused to hear the case.  And it will be left to court-appointed defense attorney Dorsey Jones Jr. to cross-examine the judge on a difficult and emotional case either today or tomorrow. 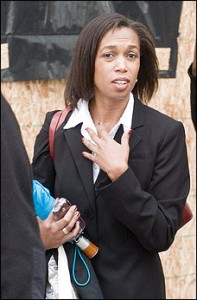 Defendant Taylar Nuevelle is on trial for burglary, unlawful entry, and stalking after the judge found her former companion in the attic above the judge’s bedroom with some food and an ice bucket serving as a toilet.  According to the Washington Post, the two women dated for a year or so after meeting at a church retreat in 2007.  When the judge tried to end the relationship in the summer of 2008, Nuevelle began a pattern of behavior, including stalking and attempted suicide, that culminated in her arrest.

Whatever challenges D.C. court personnel face in putting on the criminal case, the situation is undoubtedly most unfortunate for the judge.  In addition to the personal details about her life that have come out as a result of the case, Nuevelle has written a letter to Chief Judge of the D.C. Superior Court Lee F. Satterfield alleging that Judge Albert used her influence as a judge to remove a child from home – without the mother’s consent or a court order – to live with the two women for almost six weeks.  These allegations are now under review by a committee of D.C. Superior Court judges.  The Judge is also the defendant in a civil suit filed by Nuevelle seeking return of property.