Tiger Woods’ car accident the day after Thanksgiving illustrates a number of the DWI, DUI and OWI issues I have discussed on this blog.  The fact that Woods was charged with careless driving but not drinking-and-driving does not prove that Woods was sober at the time of the accident.  In fact, all indications suggest that he was not.  It suggests merely that police did not have enough evidence to charge him. 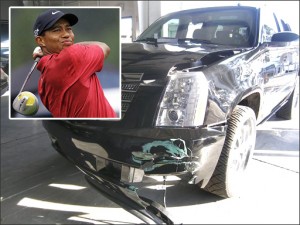 In Tiger Woods’ case, it is pretty clear that Woods was in fact operating the car.  The question is:  Could the prosecution prove that?  According to newspaper reports, Woods was lying on the pavement outside the vehicle when the police arrived.  Wood’s wife was the only person who saw him inside the vehicle operating it.  While it is conceivable that a court could infer Woods’ operation from the circumstances, it is unlikely it would do so.

It also seems likely from reports that Woods was intoxicated at the time of the accident.  At the same time, the police officers did not administer a breath or blood test and, again, Woods’ wife was the only witness to any potential consumption of drugs or alcohol.

Thus, with respect to both the elements of the offense, it looks as though the prosecution could only make out its case through the testimony of Woods’ wife.  And herein lies the rub:  the “husband-wife” evidentiary privilege.

Developed by courts over the years as a way to protect the sanctity of certain relationships, a testimonial privilege is the right not to testify under certain circumstances or against certain people without being held in contempt.  Everyone is familiar with the 5th Amendment right against self-incrimination.  Applying to both in-court testimony and out-of-court statements after a person has been taken into custody under suspicion for a crime, this privilege is deeply ingrained in our society.   (Canadian citizens who watch American T.V. will sometimes try to assert this privilege in Canadian courts only to be informed that there is no such thing as a 5th Amendment in Canada.)

There are actually two forms of the husband-wife privilege.  First, under the spousal immunity privilege, a married person whose spouse is the defendant in a criminal case may not be called as a witness by the prosecution and a married person may not be compelled to testify against his/her spouse in any criminal proceeding.  There must be a valid marriage to support the privilege.  In addition, the privilege terminates upon divorce or annulment.

Despite everything else that happened, Tiger Woods should thus consider himself lucky that he was with his wife and not one of his girlfriends at the time of the accident.

← Use of Billboards to Advertise a Law Practice
Field Sobriety Tests in Washington, DC: The One-Leg-Stand →