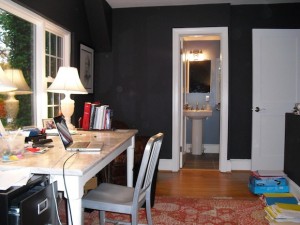 The home office where the world’s 2117th-ranked legal blog is written.

I read a New Yorker article a couple of years ago in which the author was tracking sales of his new book on Amazon.com.  While I can’t recall the author’s name or the title of the book, I remember that the book was ranked at well over 1 million on the list of Amazon.com’s best-selling books.  The author became obsessed with improving his book’s ranking.  He found that he could raise his ranking by at least a couple of thousand places every time he ordered a new copy of the book from Amazon.

A week ago, following the advice of a colleague, I listed this blog on the directory for Justia.com, a legal reference and referral service. Like the author of the New Yorker article, I have been obsessively tracking my blog’s ranking on that site ever since.

The directory lists well over 5,000 different legal blogs, categorized both by practice area and by state.  Criminal defense accounts for 368 of those blogs, second only to injury and accident law at 442. While Justia does not reveal the criteria it uses to rank the blogs, I would imagine it uses some combination of longevity (how long the site has been up), depth of content (how many and how detailed the postings are), and popularity (how much traffic the blog receives).

Number 2 on the criminal law list (#3 overall) is a blog called “Sex Offender Issues” that has had almost 700,000 visitors since February 2007.  Number 3 on the list (#6 overall), the “Mortgage Fraud Blog,”  has been posting since October 1999.  Both blogs have added multiple entries within the last couple of days, often several entries in a single day. 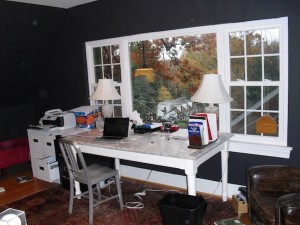 The view from the home office where the world’s 2117th- ranked legal blog is written.

So where is the Koehler Law blog on this list?  When I first checked four or five days ago, the blog was ranked 171 of the criminal law blogs and 1801 overall.   I posted an entry or two and waited a couple of days.  Two days ago, we had dropped to 189 on the criminal list and 1915 overall.   I made another entry yesterday and found that the free-fall was continuing today.  We are now ranked 212 out of the 368 criminal law blogs and 2117 out of over 5,000 of the blogs overall.

In other words, I have found that the more I post, the lower my rankings go.  This leads me to conclude that the Justia people must be actually reading the blogs to determine the rankings.  It would also explain why the “Best Defense” blog, which has been defunct since January, is ranked at 24 of the criminal law blogs and 163 overall.