Putting Faces to Names at the Solosez Lunch

One of the first things I did when I decided to open my own law practice was to join an ABA listserv called Solosez.  I’ve been telling other solo practitioners about it ever since, and am always surprised if they haven’t already heard about it.

Pronounced “so-low-says,”  Solosez is an email discussion group that, according to the ABA, currently includes more than 3,500 solo and small firm practitioners.   People suggest a topic for discussion, known as “starting a thread,” by sending an email message to an ABA computer.  The computer then forwards the message on to every subscriber in the list.  Some of the topics are serious, focusing on some substantive or procedural area of the law.  Other topics deal with whatever happens to be on the person’s mind that day.  Today, for example, there was a long list of “a man walks into a bar” jokes, with each joke-teller trying to outdo the previous one.  Many of the joke-tellers succeeded. 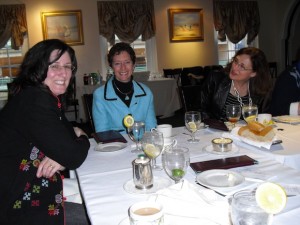 Imagine what would happen if you were at a cocktail party with some pretty smart and impressive people but, instead of off-the-cuff comments, people had the opportunity to reflect for a few moments on what they wanted to say before saying it.  That’s what you get on Solosez.

You can get an answer on almost anything you need to know within a matter of minutes, whether related to the practice of law or not.  In fact, I haven’t made a single decision on the launching of my firm that I haven’t cleared through the Solosez group first.  Needed a recommendation on someone to design my website?  Got it.  Needed feedback on my firm name or finished website?  Got it.  Had a great idea on a slogan/tagline for the firm?  Dropped it when it became clear that people didn’t share my enthusiasm for it. 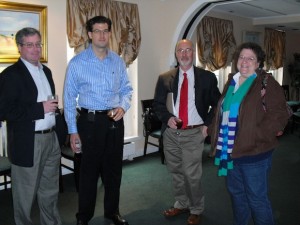 One time I posted a message asking if anyone was familiar with D.C. requirements for registering a sole proprietorship.  Literally within minutes of posting the question, I had the answer back from the guy who runs the D.C. Bar Law Management Practice.

The discourse on Solosez is also amazingly civil for an on-line community, particularly when you consider that most of the participants are lawyers.  I used to participate many years ago on a on-line forum for writers run by Poets & Writers magazine called Speakeasy, and was amazed at how quickly the discussion could degenerate into name-calling and insults.  There are occasionally heated exchanges and ruffled feathers at Solosez but they tend to die out quickly and nobody seems to hold a grudge.

I “lurked” at the site for a while when I first joined, monitoring the conversation to get a feel before I posted my first entry.  I didn’t want to make a fool of myself or violate any written or unwritten rules of the site.  One day another lawyer posted her first message, introducing herself, as is customary, by identifying her favorite drink and saying whether or not she had any pets.

The lawyer then told a long and woeful story.  She had recently graduated from law school, and didn’t feel she had any experience or prospects.  Deeply in debt from paying for law school, she had no money to pay for an office, computer equipment, a legal research service, or anything else she would need to start a law practice.  She couldn’t do any of the marketing activities she had read about because she had a child and couldn’t take time away from the child to network. 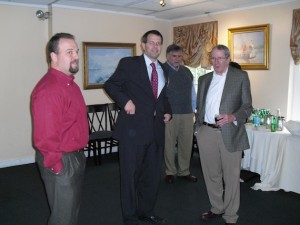 I read the post, and, thinking about the reception this woman would have received had she posted this message at the Poets & Writers forum, I waited for the response.  There was a long silence.  Then the encouragement began.  Well, someone said, you passed the bar exam, didn’t you?  That was quite an accomplishment.  If you can do that, you can certainly succeed in law practice.  You don’t need an office, someone else piped in.  With the amazing technology we have these days, you can work out of your home.  You don’t need to pay for a legal research service.  You can find everything you need for free at the local law library.  And so on.  Not a single person said what I was thinking:  Are you crazy?  Give it up!  You will never succeed given that kind of situation!

The communication at first is overwhelming.  It took me a while to figure out how to navigate the hundreds of messages that are posted each day, and I didn’t know one person from another.  After a while, when things began to settle in, it was fun to get a feel for the different people who participate.

There is a traffic lawyer near Fredericksburg who always has something insightful to say.  There is a straight-talking criminal defense lawyer, with liberal leanings, from outside Philadelphia.  There is the dean of solo practitioners in the U.S. whose website and book have served as the bible for new practitioners such as myself.  There is the real estate, copyright, and trademark lawyer from New York who has the answer to every technology question ever asked.  And so on.  You find yourself missing people when they haven’t posted for a while.

I have also wondered about who these people are in person.  Usually, if someone posts something that I find interesting, I will check out the person’s website to find out what they look like and to find out more about their practice areas.  I have to admit, there is also an element of comparison.  Gosh, that person’s site sure is good-looking.  Why didn’t I think of something like that?  In other words, I’ve suffered from logo- or website-envy.  One time, when I saw someone’s site that I really liked, I went back to my website developer and asked him to change all the colors of my site to the red, black and white of the website I admired.

Given this curiosity, I therefore jumped at the opportunity in September and then again today, to meet many of the “Solosezzers” in the Washington, DC metropolitan area for a monthly lunch at Tragara’s restaurant in Bethesda.  I am told that these lunches are networking opportunities that have generated tons of referrals over the years.  For me, it was a good opportunity to make new friends and to put a face on the names I have often wondered about.

I talked with a dynamic lawyer who practices mostly federal criminal law in Maryland and D.C.  I also traded marketing strategies and ideas with two other attorneys who are at similar stages of opening law practices as I am, one a trusts and estates lawyer from Falls Church and the other a bankruptcy lawyer from D.C.

Today I asked permission of the Sezzers to photograph them so that I could post the pictures on this blog.  I hope I have identified everyone correctly.